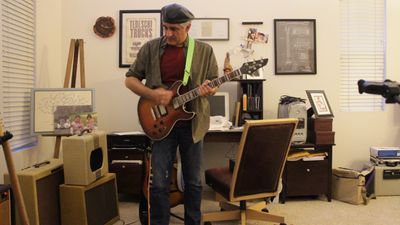 Since the first single was released on April 22nd (2016), I decided you should get to know the gear that is dear to my heart.  All that I'm profiling here is what's been used in the recording so far.

Part one, you see, is my 2005 Squier Master Series Esprit, built by Fender.  It was designed by one of the Fender Custom Shop artists, to my knowledge, it was only built for a few years.  It is, essentially, a working-class version of the Fender Robben Ford model guitar.  I have always loved Ford's tone, and since I cannot afford a Dumble amplifier (if you don't know what those are, suffice to say you'd have to have Warren Buffett money to afford one) I always wanted a Ford model.

However . . . the Squier offered a few things I favored over the more expensive models:
It didn't have the jumbo Les Paul style frets, though they're larger than a standard Stratocaster's.  The chambered body is the same as the Ford's and the neck feels far more like a Strat even tough it's glued on and not bolted.

So why, if you're not a musician, should you care?

Tone, my friends.  Quite frankly, I used this for the rhythm for a forthcoming track . . . and it's the tone for the solo for When the Morning Comes.  The combination of this guitar through a 50 Watt Marshall amplifier is almost pure Allman Brothers tone.

When I bought this, it was one of 2.  The other had a different finish, was red, and that one . . . just didn't sound very good.

This one, though, was amazing.

The pickups - the things that capture sound - were decent but not great.  I ordered a pair from Lindy Frailin that made this thing sing.

When I went into the studio with the Ain't Got No Time (Rock and Blues) Band I knew this had to be the guitar to do the solo for the first song.